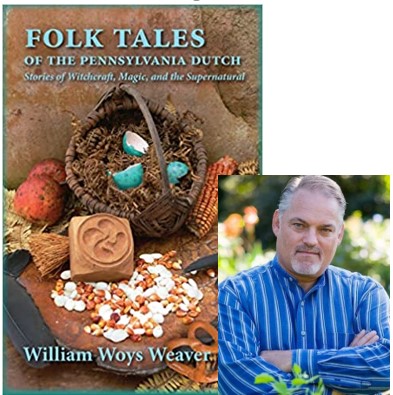 Folk Tales of the Pennsylvania Dutch:

Stories of Witchcraft, Magic, and the Supernatural

Dr. William Woys Weaver will be doing a reading of one of the stories, sharing how he came to collect and preserve these folk tales as well as some of the related folklore.

These stories are creative adaptations of traditional folk tales brought to life by a culinary legend and master in the art of storytelling. Peppered with Pennsylvania Dutch language expressions, and a generous portion of regionally-specific folk-cultural traditions, Weaver's writing is helping to keep the old stories vibrant for new generations to enjoy.

William Woys Weaver is an internationally known food historian and author of eighteen books including The Roughwood Book of Pickling (2019), A Quaker Woman’s Cookbook (1982, new edition 2004)—a study of a 19th century domestic book by Elizabeth Ellicott Lea, America Eats (Harper & Row 1989), and The Christmas Cook (Harper-Collins 1990), a 300-year history of the American Christmas. Weaver has been featured on such national programs as “Good Morning America” (with Julia Child) and NPR’s “Fresh Air,” and has appeared in many special food documentaries, including “Terrapin,” which won an Emmy in 1993, and more recently, “Open Sesame: The Story of Seeds.”

Dr. Weaver served for several years as a Contributing Editor to Gourmet, Mother Earth News and The Heirloom Gardener. From 2002 to 2010, he lectured as Adjunct Professor of Food Studies at Drexel University and taught courses on regional American cuisine in connection with the Keystone Center for the Study of Regional Foods and Food Tourism, a non-profit academic research institute now part of The Roughwood Table