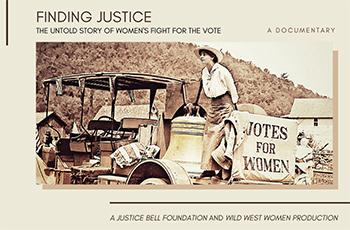 Finding Justice: The Untold Story of Women's Fight for the Vote Online

Join us for a virtual screening of the documentary Finding Justice: The Untold Story of Women's Fight for the Vote, followed by a Q&A with filmmaker and Executive Director of the Justice Bell Foundation, Amanda Owen.

Part present-day detective story and part a historical account of the movement for voting rights, Finding Justice: The Untold Story of Women's Fight for the Vote tells the story of a band of intrepid women and their one-ton bronze bell that became a celebrated icon of the women's suffrage movement.

The Justice Bell Foundation is a nonprofit organization whose mission is to reclaim women’s history, highlight women’s contributions, and to honor the Justice Bell and its historic role in the American struggle for women’s suffrage and equal rights. Learn more at www.justicebell.org

This virtual event will take place via Zoom. You will receive a Zoom invitation via email after registering.